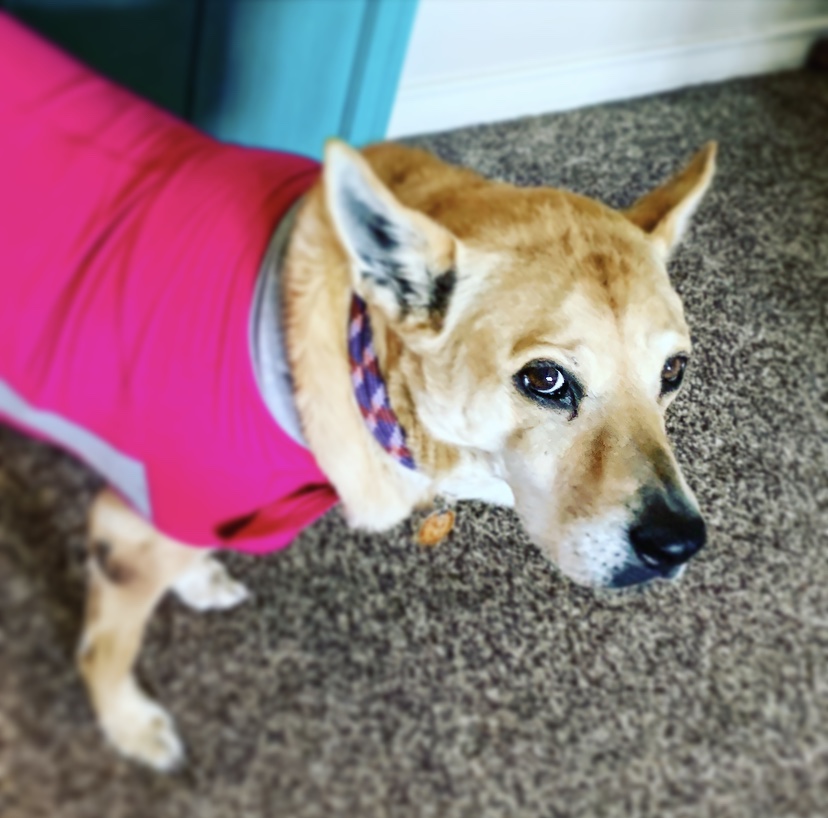 Just 5 days after Piper found her forever home with us we learned she is terrified of thunder, fireworks, and most loud noises. Our usual New Year’s Eve festivities consist of some very laid back celebrations: a little wine (or a lot) or some beer, a movie, some champagne, maybe watching the ball drop. As we wound down our night this year we did our usual bed time routine with the pups. Piper was still learning but she knew to follow my husband outside for one last play before settling in for the night. As soon as she stepped outside *BOOM* the crashing sounds of fireworks. She ran right back inside and hid in the closet until daylight. The next morning I fed her breakfast to her by hand on the closet floor. I can’t imagine the trauma of her life – being passed around, abandoned at a shelter, rescued only to be abandoned again. She was understandably wary of us.

THIS IS ACTUALLY MY FIRST RODEO

In all my adult life I’ve never had a dog that was afraid of thunder or fireworks. In my twenty-something’s I had a pit bull named Sazjou (Sawz-shoo). The first of my funny-bunny-furbabies. He was afraid of palmetto bugs. Nothing else frightened him. But a good ‘ol Florida palmetto bug sent him scurrying into a furious scooby-doo run. Darby, my first chocolate lab, was definitely the bravest of my brave dogs… unless you opened a musical greeting card. Then all bets were off and he could probably be found hiding under a bed. Tango, the badassiest of the badasses, once sat next to some kids shooting off roman candles on the lake, watching intently and happily as they burst into the sky. But person-less bicycles sent him into flight mode. If there was a rider, they were fine. But once that rider set their bike down, it was an enemy of the state! Cash, my silliest of the silly boys, is afraid of so much: The right side of the car, my deodorant, bubble wrap… but not thunder, not fireworks. Whiskey, oh Whiskey Beans. The wildest of the wildmen. I fear he fears nothing, and it’s a little scary. What all these guys have in common is that I had them all since they were puppies and I made conscious efforts to practice obedience training during thunder storms, fireworks celebrations, around loud distractions, etc. I’m lucky this method has so far worked for past and present furbabies. Fortunately they’ve all had positive associations with crashing booms and shotgun-like sounds.

Piper, however, did not have this benefit. I have no idea what she did have. We only have small pieces of a huge puzzle of what her previous life was like. I didn’t know how to help her so I did what I always do when I don’t know something 👉🏼 I researched the hell out of it. I hit the internet, talked to friends, professionals, dog groups, read blogs. I read review after review on dozens of products. I’ve tried CBD oil, lavender, Benadryl, hemp, snug shirts. I created safe spaces, distraction games, and began desensitizing her to loud noises. There have been times that if we could preempt the panic, if we knew the loud noise was coming, a combination of these techniques proved mostly effective. But if she’s already to the point of shivering I can only offer her comfort and wait it out with her.

This where we found ourselves on July 3rd. We knew a storm was coming so we gave her some Benadryl at dinner. The hope was that the storm would be here long after she had fallen asleep. This had worked during a few previous spring storms. I watched the radar as it grew increasingly stronger and realized it was going to be outside Benadryl’s wheelhouse. A few heavy booms and she was pacing and panting. I sat on the floor with her hugging her to my body. She can’t tell me what she’s feeling or thinking but I think of how I feel when I’m having a panic attack that has gone far beyond any type of soothing or medication and I hug her tighter. I think about her previous owner who built a shed for her in his backyard and imagine her terrified and shivering inside it with no one to comfort her as a similar storm rolls through. I hug her even tighter. She buried her head under my arm as the thunder rolled through and hail pounded down on the roof. When she lifted her head during the quiet, I could see she also does not like the way lightening dances around the house through the sky light and windows. She most certainly has figured out thunder follows.

Earlier in the week I had ordered a ThunderShirt, specifically in anticipation of July 4th fireworks. As I reached over my head and grabbed the package off my nightstand Piper stayed glued to my body. Cash playfully rolled around us on the floor and offered the occasional paw to nose boop. Whiskey slept in his bed the entire time and had no idea any of this happened. About an hour after wearing the thunder shirt Piper calmed down and sauntered off into her cubby for the night. She awoke the next morning without a single sign of the previous night’s trauma. Success? We’ll take it, even it had a rocky start.

I was fully prepared to spend another night on the floor with our princess. I put her thunder shirt on her while it was still daylight and quiet outside. She trotted off and went about her day. At dinner time my husband put CBD oil in her food. By nightfall she was cuddled in her bed, snug as a bug, happy as a clam, on cloud nine. It seems we may have found the magic combination for success.

I hate that we’ve had to trial-and-error Piper’s anxiety, but not every method works for every doggo. I’ve received tons of solicited and unsolicited advice from everyone and their grandmother’s neighbor. And I’ve taken it all into consideration. I’m not sure there is a one size fits all solution. But my completely unsolicited advice is start with CBD oil (we use Source*), and a snug shirt/vest (we use the ThunderShirt Polo*), while also working on desensitizing your pup to loud noises. Desensitization requires patience and in severe cases can take months – and may also require a trained professional. Eradicating the fear itself may never be possible depending on the root of the fear, but desensitization can lessen the fear and help heal the trauma. This is the quick video I used as a desensitizing tutorial*. I don’t expect that Piper will ever fully be free of her fear because I don’t know what’s happened in her nine plus years of life before she came to us. My goal for her is simply to be less afraid. My hope is that the safety of our family and home will eventually outweigh the fear. Ultimately it’s your furbaby and you know them best.

* I do not receive any type of compensation for the products I recommend. I have no material connection to the brands, products, or services that I have mentioned or linked in this blog post. Any recommendations are based solely on my personal experience.

I am a dog mom, zombie lover, Netflix addict, Bravo junkie, yoga enthusiast, dark chocolate aficionado, beer connoisseur, and master procrastinator. My days are filled with dog fur, tail wags, and fetchies. I love sharing the (mis)adventures and shenanigans of our crazy fur crew, from the laughs to the tears to the unconditional love a dog gives. Our house is full of funny bunnies, wiggle butts, and boo bears. It’s a dog’s life here. View all posts by barkingmadlab